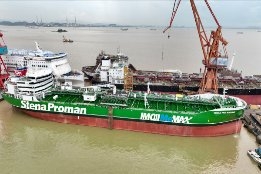 Proman Stena Bulk has hailed what is see as the growing momentum of methanol-powered vessels across the shipping industry.

An uptick in recent backing for the emerging marine fuel "highlights methanol's key advantage as a globally available cleaner marine fuel: its proven net-zero pathway allows shipowners to invest in vessels that are already futureproofed," the firm says.

The comments came alongside the delivery of its second methanol-powered newbuild tanker, Stena Pro Marine.

It follows the delivery of Stena Pro Patria in June.

Both 49,990 DWT IMOIIMeMAX dual-fuel mid-range (MR) tankers were built at Guangzhou Shipyard International Co Ltd (GSI) in China and are expected to consume 12,500 tonnes of methanol per annum.

"We truly believe that these vessels are not only a step forward for MR tanker design but are also a clear statement of intent to the market," said Erik Hånell, President and CEO of Stena Bulk.

"They showcase our confidence in methanol as an important and viable solution for the future of sustainable shipping."

While the use of methanol as marine fuel is nothing new - Stena Line's Stena Germanica, for example, began burning methanol bunkers in 2015 - its use within the industry is nevertheless extremely rare.

However, interest in the alternative marine fuel has risen considerably as the industry looks for commercially viable ways to decarbonize its operations.

VPS has detected volatile organic compounds in VLSFO samples from multiple suppliers in the ARA region from deliveries in May and June.