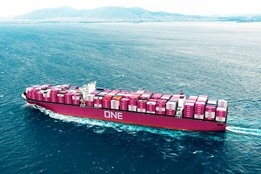 ONE joins the "big three" in making the controversial move. Image Credit:ONE

Ocean Network Express (ONE) today became the latest carrier to announce the introduction of an emergency bunker surcharge (EBS).

The carrier, founded in 2017 with the merger of the liner operations of Nippon Yusen Kaisha (NYK Line), Mitsui-OSK and "K" Line, joins the "big three" of MSC Mediterranean Shipping Company S.A. (MSC), Maersk Line, and CMA CGM in making the controversial move.

"ONE has encountered progressive and significant inflation of fuel costs over recent months. Bunker fuel prices have increased by more than 25% during 2018 and could escalate still further. This sustained surge in fuel costs has greatly impacted our cost base. The escalating cost situation has now reached the point at which ONE are forced to respond by adjusting our approach to bunker related pricing components," the company said in a statement today.

"ONE continues to explore all avenues to mitigate fuel consumption and costs for the benefit of the environment and supply chain costs of our valued customers."

ONE controls 7.1% of the total TEU capacity of the global fleet, according to Alphaliner.

The introduction of an EBS has drawn heavy criticism from shippers, who have accused carriers of a lack of transparency and failing to control their costs.

The company has ordered the ships from Samsung Heavy Industries for delivery in 2023 and 2024.