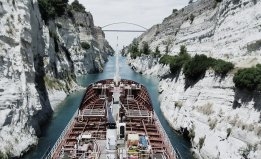 Marine fuel supplier Bunker One is allowing some of its customers to view live video streaming of their ship being bunkered to bring more transparency to the process.

Buyers taking deliveries via Bunker One's barge the Amak Swan can now view a live video of the operation, or view the recording for up to 45 days afterwards, a company representative told Ship & Bunker by email.

The Amak Swan operates around the Baltic, delivering bunkers to ships in Danish and Swedish waters.

The service "enables flexible and transparent bunkering by digitalising the process," the company representative said.

"This is especially relevant if crew members from the customer's vessel are prevented from boarding the supplying barge to witness the bunkering process, including the sampling process.

"Bunker One still invites and welcomes customers on board Bunker One's barges to witness the bunkering and sampling process, but if boarding is not possible for some reason, Bunker One offers live streaming as an alternative solution."

The new service highlights how the bunker industry is adapting to the restrictions placed on it by the COVID-19 pandemic, shifting to operations that minimise physical contact between seafarers while trying to avoid extra delays.

Bunker One's representative highlighted how the service may reduce concerns over bunker quality.

"90% of all our customers do not witness the sampling process, thus we want to make it easy.

"And we hope this will be industry standard one day to have full transparency on the sampling."

And while this is not the explicit aim of Bunker One's new service, if implemented more widely it may also help the industry with the issue of quantity disputes and other malpractices that still overhang it.

Quantity disputes in particular have been a global issue for the industry for much of its history. While there is no consensus view on the scale of short delivery malpractice, BLUE Insight's Adrian Tolson last year estimated that Singapore's introduction of mandatory mass flow metering for fuel oil deliveries from 2017 had likely saved marine fuel buyers some US$1.7 billion.

With Singapore the only market to make MFM use mandatory, the problem -- or at least the suspicion of it -- remains. But even in Singapore, MPA has had to take action against players attempting to tamper with MFMs. There are also numerous other tricks of the bunker trade buyers may face.

Thus, being able to view the bunker operation live from the shipping company's head office may provide some additional reassurance that the delivery is being carried out legitimately.

"We are fully up and running with Bunker One Live Streaming on M/T AMAK SWAN, and it will be installed on other of our supplying units in the coming period," Steffen Kortegaard, technical manager at Bunker One, told Ship & Bunker by email.

"The solution has been tested by a number of customers with strong results and great response.

"We hope that this initiative will set new standards for our industry, thus enhancing transparency, embracing digitalisation and creating more value for our customers."

Techfast subsidiary Fast Energy has agreed to provide marine fuels supplier Wise Marine with 10,000-30,000 mt/month of bunkers over the next three years.

Greater efficiencies in port operations can help reduce GHG output, according to the Ship-Port Interface guide.