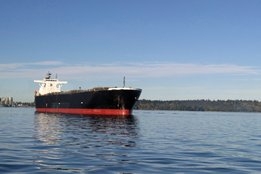 Limiting ship power, rather than speed, would be a superior way to control bunker consumption as part of the industry's quest to slash its emissions footprint.

This is the idea at the heart of a new proposal by BIMCO submitted to IMO for discussion in London next month.

"Measuring a ship's speed is not an accurate exercise, therefore, other avenues have been investigated. It has been concluded that limiting ships' propulsion power can be controlled accurately and at the same time, it has a close correlation to speed," BIMCO says, adding that the idea of setting a limit for ships' power has already been suggested by Japan.

BIMCO's proposal follows a significant push at MEPC 74 earlier this year to cap vessel speed, with the proposal seeing a broad level of support ranging from politicians, youth climate activists, and ship owners.

The organisation says there is no question that a ship's speed is the single most important variable influencing its CO2 emissions, but the speed of a vessel for a given engine power output will vary based on a number of factors.

While it is imperative to ensure the GHG emissions savings through slower steaming are sustained, it is also important that owners are incentivised to innovate

"Environmental conditions such as sea currents, sea state and weather conditions impact heavily on the relation between speed over ground and speed through water. For this reason, and due to cargo loading condition variation between voyages, emissions vary significantly for the same speed of a ship," the submission reads.

For example, BIMCO says power to overcome prevalent weather and sea conditions is included by virtue of 'service margin', usually set to 15% on top of calm weather power requirement for a given speed.

The submission also points to other advantages of capping power rather than speed. For one, ships' speed is not easily assessed from an enforcement perspective.

BIMCO argues that capping power also provides for a goal-based approach that promotes improvements to efficiency: "Keeping in mind that the goal is to reduce emissions, focus should be on emissions, and by proxy, power."

Exactly what the power cap should be is a matter for further discussion, says BIMCO, but suggests that at least initially it should be sufficient for vessels to achieve a "target speed" determined using an average operational speed for each relevant ship type.

"While it is imperative to ensure the GHG emissions savings through slower steaming are sustained, it is also important that owners are incentivised to innovate," says Lars Robert Pedersen, BIMCO Deputy Secretary General.

The proposal will be introduced at the Intersessional meeting of the working group on reduction of greenhouse gas emissions from ships at the IMO in London on October 11-15.