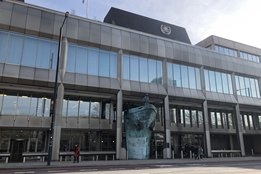 A member of UK-based youth climate action group UK Student Climate Network (USCN) is set to address the IMO today as part of MEPC 74 to urge emissions reductions from the shipping industry.

Specifically, activist Noga Levy-Rapoport will call on IMO delegates to support a reduction in shipping speeds by at least 10% as a way of tackling some emissions right away, ahead of the proposed plans for emissions reductions by 2050, a spokesperson for USCN has told Ship & Bunker.

“The message from young people is that we must listen to scientists and act now. We can’t afford delays. That includes the shipping industry and it includes aviation," Levy-Rapoport said in an emailed statement.

“Delegates at the IMO have a responsibility to represent their countries’ futures, not just corporations concerned about short-term profits."

The idea of speed limits to reduce GHGs has recently emerged as the industry's latest way to polarize its stakeholders, with a European Commission (EC) funded study last week saying it is one of only a few ways the industry can meet its GHG reduction pledge, while the UK Chamber of Shipping said not only would speed limits give a false impression that industry is reducing its carbon emissions, it will actually have the opposite effect.

The Shipping industry's current GHG reduction targets, as agreed last year at MEPC72, is to reduce its total annual GHG emissions at least 50% by 2050 compared to 2008 levels.

Additional goals, such as IMO2030 target to improve the CO2 intensity of maritime transport by at least 40% relative to 2008, as well phase out GHG emissions from shipping as soon as possible in this century, were also made.

Progress towards these targets is the focus at IMO over the next two weeks.

But multi-fuel market and logistical problems weigh against smooth transition.

The sudden absence of 1 million b/d of sweet crude in the Mediterranean would have a sharp knock-on effect on VLSFO prices in the region.