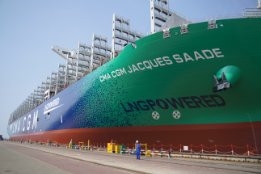 CMA CGM Group and LNG bunker advocates today chalked off another milestone for the alternative marine fuel as the 23,000 TEU capacity CMA CGM Jacques Saadé was officially added to the box carrier's fleet.

The vessel is the first of nine LNG-powered box ships that the French carrier ordered in 2017 and enters the global fleet as the world's largest LNG-powered containership.

She will operate on the French Asia Line and start her maiden voyage tomorrow, September 23.

The recently named bunkering vessel will operate out of Rotterdam.

While debate over LNG's carbon impact remains ongoing, CGM CGM today took the opportunity to stress the green credentials of Jacques Saadé and LNG bunkers as a whole.

"While guaranteeing the safety of our crew, it preserves air quality and will be part of our fight against global warming. It significantly improves the environmental footprint of carried goods."

Director Unni Einemo suggests a fall of between 7-17% from the effects of the global pandemic.