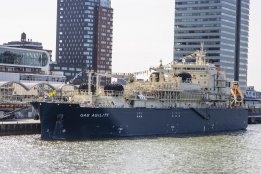 The barge has 18,600 m3 of LNG carrying capacity, is owned by Mitsui OSK Lines subsidiary Emerald Green Maritime and will be chartered by Total Marine Fuels Global Solutions.

The ship will primarily be used to fuel the nine new 23,000 TEU gas-powered container ships ordered by CMA CGM in 2017. The first of these ships, the CMA CGM Jacques Saade, was launched in September 2019 and is due to enter service later this year.

Total has agreed to supply the new ships with 300,000 mt/year of LNG over the next decade, making CMA CGM by far the largest buyer of LNG bunkers once the vessels enter service.

Jesper Rosenkrans, global sales and business development director at Total Marine Fuels, is due to discuss the company's plans in the marine fuels space at the at the IBIA Annual Convention 2020 in November.