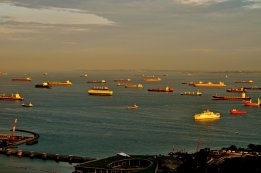 The company estimates that for the bunker industry as a whole, less than 1% of the bunker delivery fleet has MFMs installed. File Image / Pixabay

Bunker supplier TFG Marine has called for the mandatory use of mass flow meters to measure bunker deliveries.

The firm has joined with 50 other organisations representing 2,000 vessels calling for the Rotterdam and Antwerp port authorities to make the use of MFMS compulsory for bunker deliveries, it said in a statement on its website on Thursday.

"Marine fuels are supplied around the globe at different densities and in diverse atmospheric and climatic conditions," the company said in the statement.

"Traditional delivery systems, which only monitor volume flow, cannot capture these differentials with any precision.

"Suppliers and customers therefore rely on manual measurement and adjustment formulae to agree the specifications for every transaction.

"The complexity and opacity of this process makes it difficult to track and report transactions with confidence and accuracy.

"It also leaves customers vulnerable to fraud and corruption.

"Some operators have taken advantage of this complexity to game the system.

"There is a long and shameful history of dubious practices by bunker fuel suppliers that have short-changed ship owners on volumes."

Singapore made the use of MFMs mandatory for fuel oil deliveries in 2017, a move which has since been widely welcomed in the industry worldwide. But other port and maritime authorities have yet to follow suit.

In a recent survey by industry bodies IBIA and BIMCO, respondents rated their support for MFMs on a scale of one to ten at an average of 8.43.

Adrian Tolson, head of consultancy BLUE Insight, published research earlier this year estimating that shipowners and charterers that pay for fuel in Fujairah and Rotterdam were losing as much as $250 million per year in payments for fuel they didn't receive.

TFG has installed MFMs on more than a third of its fleet, and plans further installations over the next two years. The company estimates that for the bunker industry as a whole, less than 1% of the bunker delivery fleet has MFMs installed.

"While other industries have embraced digitalisation, the shipping industry has fallen well behind," the company said.

"MFMs have been used in a wide range of industries for many decades.

"While it is true that, until relatively recently, most ships' systems could not easily incorporate MFM equipment, that is no longer the case.

"The industry is running out of excuses to avoid modernising and bringing into force rigorous standards of reporting and accountability.

"It's time to make MFMs mandatory."