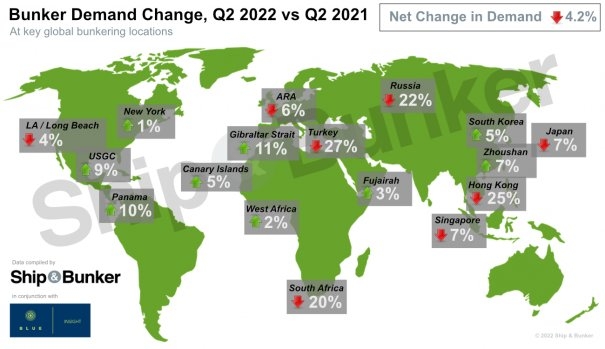 Demand at key marine fuel hubs slipped on both a yearly and quarterly basis in the second quarter of 2022, according to the latest market survey of bunker sales volumes in 17 leading global locations, as the Ukraine crisis left markets in turmoil.

As in previous quarters, Ship & Bunker and consultancy BLUE Insight surveyed bunker market participants around the world alongside official data where available and found an average drop of 4.2% in volumes in the second quarter from the same period of 2021. The year-on-year decline compares with a 2.6% year-on-year drop in the first quarter of 2022. Q2 volumes sequentially were 5.3% lower than in Q1 2022.

"Q2 evidences some obvious impacts with significant demand loss in both Russian ports and Turkey.

"Shifts and changes in shipping routes and supply chains helped increase activity in the traditional bottleneck ports of Panama and Gibraltar."

The Russia-Ukraine crisis remained the biggest factor overturning the global bunker industry in the second quarter.

Russian sales were down significantly over the year, though had stabilised on a quarterly basis. But the knock-on effects were seen much more widely, with the Turkish market in particular facing a downturn as shipping activity in the Black Sea dropped.

While oil exports from Russia are largely continuing, the tankers carrying these products tend to bunker at Russian ports.

Elsewhere in the world, with much of the West seeking to phase out Russian oil imports, exports from other countries are now travelling further to make up the deficit, boosting tanker demand and helping bunker sales at ports where tankers are a prominent part of the market.

Away from the Russia crisis, in the second quarter Singapore was dealing with the fallout from its contamination problems in February and March, with Q2 HSFO sales particularly affected.

That rise in prices should drive healthy profit margins for the bunker industry, but will also tighten the availability of the credit that the industry relies upon.

At Monjasa, we experienced high activity levels and increasing volumes across our global trading activities and physical supply operations.

A spokesman for global marine fuels supplier and trading firm Monjasa said its performance had remained healthy in the second quarter.

"At Monjasa, we experienced high activity levels and increasing volumes across our global trading activities and physical supply operations."

US-listed World Fuel Services, the world's second-largest bunkering firm by volumes, saw its bunker margins surge to the highest level since at least 2014 in the second quarter.

"As evidenced in the past and then again during this past quarter, during times of elevated fuel prices, constrained credit and rising interest rates, we become a more critically valued counterparty, which increases our success rate and contributes to profitable volume growth."

It will be interesting to see if price shifts generated by the increasing level of oil sanctions seen in recent months will further shift demand patterns as the year progresses.

"From our perspective as a marine energy provider with offices in every key maritime hub, we have seen volumes increase globally by 2% in Q2 compared to Q1 this year," Grønborg said.

"In Q2, the Amsterdam-Rotterdam-Antwerp (ARA) region saw an increase in volume by 9%, while Asia rose by 18%.

"In Singapore specifically, we experienced a 19% increase.

"This trend was also replicated on the US East Coast and in the Gulf of Mexico, where Q2 volumes were up 25%.

"Conversely, volumes in the Mediterranean and Black Sea decreased by 5%, and we saw a decrease in the Middle East of 16% and 21% in Gibraltar.

"Shifting trading patterns and the impact of the war in Ukraine will continue to create volatility, as well as increased complexities and risk within the bunkering sector.

"In this kind of market, it becomes even more critical for ship owners and operators to work with trusted and transparent partners that have a global focus, flexibility and financial strength to quickly respond to rapidly changing dynamics, while providing the right fuel procurement solutions for customers.

"We certainly do not anticipate this situation changing in the short-term, and will continue to guide our customers through these transformative times."

As with the previous surveys the areas covered by the survey are Singapore, the Amsterdam-Rotterdam-Antwerp (ARA) hub, Fujairah, the US Gulf, South Korea, Russia, the Gibraltar Strait, Hong Kong, Panama, Zhoushan, Japan, New York, West Africa, South Africa, the Canary Islands, Los Angeles/Long Beach and Turkey. Data is sourced from a combination of market participants and official records.

The full breakdown of the survey results including sales volumes in each bunkering region for Q2 2022 and 2021 is available for subscribers by clicking here.

Further disruption can be expected in the third quarter's figures as the full impact of the record surge in prices is felt, as well as the impact on trade flows as Russian fuel oil is steadily phased out from European markets.

"It will be interesting to see if price shifts generated by the increasing level of oil sanctions seen in recent months will further shift demand patterns as the year progresses," BLUE Insight's Tolson said.

The firm will install a 6.6kV shore power connection on board one of its tankers currently under construction in China.