PoLB and Port of L.A. Request Proposals for Zero-Emissions Technology 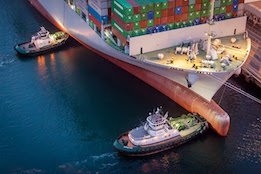 PoLB and the Port of L.A. are seeking demonstrations of technologies to upgrade harbour craft to cleaner engines. Image Credit: PoLB

The Port of Long Beach (PoLB) Thursday announced that, in partnership with the Port of Los Angeles (Port of L.A.), it has released a request for proposals for demonstrations of technologies to upgrade tugboats, crew boats, barges, and other harbour craft to cleaner engines in order to support the ports' goal toward zero-emissions.

"Reducing emissions from harbor craft is a key strategy in the recently released draft Clean Air Action Plan (CAAP) update, developed with input during more than 50 public meetings," said PoLB, noting that the ports' Harbor Commissions are set to meet in November to consider the final draft.

The request for proposals, issued under the Technology Advancement Program, offers $500,000 - $250,000 from each port - for one or two demonstrations of technologies to upgrade engines to Tier 3 or Tier 4 standards in order to make the engines up to 70 percent cleaner.

PoLB says that harbour craft are the second-largest source of diesel particulate matter air pollution in San Pedro Bay, accounting for 18 percent of emissions, with the vessels contributing 10 percent of nitrogen oxide and 6 percent of greenhouse gas (GHG) pollution.

"We are looking at ways to reduce emissions from harbour craft beyond existing regulatory requirements," said Heather Tomley, PoLB's Director of Environmental Planning.

"We need more viable cost effective technologies, and as the Green Port, we're going to leverage all of our tools to lead the goods movement industry to a more sustainable future."

The deadline for proposals is Thursday, September 21.

Last week, Ship & Bunker reported that PoLB and the Port of L.A. had released the draft of their proposed 2017 Clean Air Action Plan (CAAP) Update, which outlines a new set of near-term and long-term strategies to reduce air pollution from all port-related sources.

MSC CEO Soren Toft revealed the figure in a presentation at the London International Shipping Week conference on Wednesday.

The firm has signed a deal to receive a 'transition loan' from 10 Japanese lenders for the construction of the two ships.