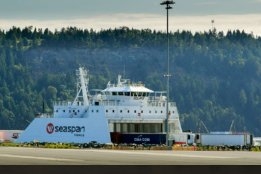 The product will be used in the North Vancouver-based operator's Ro-Ro fleet and the firm anticipates upwards of an 85% reduction of greenhouse gas emissions compared to traditional diesel fuels.

With carbon neutral synthetic gas bunkers thought to be decades away, and concerns over the status of traditional gas as a fossil fuel, working RNG into the LNG bunker supply chain is an important step in demonstrating gas can play a long term role in industry decarbonization efforts.

The RNG for Seaspan's trial is being produced by local supplier FortisBC.

"When bacteria breaks down organic waste from sources such as landfill sites, agricultural waste and wastewater from treatment facilities, it produces a biogas mostly made of methane," the company explains.

"FortisBC captures and purifies this biogas to create RNG, a certified carbon neutral energy source, preventing the release of methane into the environment."

A key advantage of RNG is that it is a "drop on" fuel and mixes seamlessly into the existing natural gas infrastructure.

"We know that our future is a renewable one – so when Seaspan approached us about being a part of an RNG pilot for marine LNG vessels, we were tremendously excited," said Mike Leclair, vice-president, major projects and LNG at FortisBC.

"Using Renewable Natural Gas for marine LNG has the potential to be an emissions game changer for the sector."

FortisBC says RNG production has increased dramatically this year, and while exact volumes were not given it says by the end of 2021 it expects to have tripled its RNG supply from 2020 and is poised to potentially triple it again by the end of 2022.

The city-state's total demand climbed to 4.3 million mt in October.

Christophe El Kati has joined the firm as senior manager for marine and bunkering.