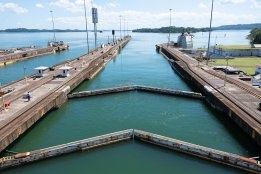 Bunker demand is on the wane in Panama. File Image / Pixabay

Bunker demand in Panama dropped to the lowest level since September last month, according to the latest data from the Panama Maritime Authority (AMP).

The number of ships arriving in Panama for bunker fuel climbed by 2.6% on the year to 545 in May, meaning the average stem size sank by 7.6% to about 722 mt.