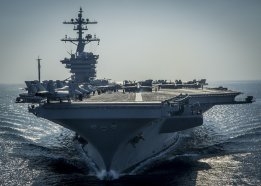 The US Navy may expand rapidly over the next 25 years. File Image / Pixabay

Pentagon officials are considering recommending a sharp increase in the size of the US Navy to as many as 534 ships, according to US military publication Defense News.

The upcoming Future Navy Force Study may recommend an increase to somewhere between 480 and 534 ships, up from the current target of 355 manned ships by 2030, Defense News reported Thursday, citing supporting documents to the study.

The numbers may include unmanned ships.

The Future Navy Force Study was launched in January and seeks to determine an ideal fleet construction for the year 2045, the publication said. Feedback from the study will be used towards the Navy creating its shipbuilding plan and coming up with a fiscal 2022 budget request.

One crew member was reported missing and the remaining 11 were rescued.