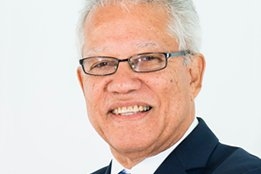 Jamaica's ambition to become a true logistics hub for the Caribbean is no secret.

From its beneficial geographical location to favourable regional developments such as the widening of the Panama Canal, the potential for that ambition to be realized is also clear.

Be it the establishment of West Indies Petroleum in 2013 - the only all Jamaican owned company in the bunker market - or the inaugural and highly successful IBIA Caribbean Bunker Conference (ICBC) held in Jamaica last year, there are plenty of signs that the country's vision is becoming a reality.

S&B: IMO2020 will bring many changes to the bunker and shipping industries at both a global and regional level. How will Jamaica's role in the market change as a result of the new sulfur cap?

It is expected, and we are confident, that with the coming into force of the 2020 sulphur cap that the local bunker suppliers will continue to meet the demand for compliant fuel in the post 2020 period.

PB: Jamaica is growing as a major bunkering hub in the region with three bunker suppliers operating out of the port of Kingston and the cruise ship facilities located on the North Coast.

Over the last 24 months there has been an increase in maritime activities in relation to LNG facilities, dredging, oil and gas exploration activities. This has been complemented by the increase in the size of vessels calling at the Kingston Freeport Terminal Limited as a result of the completion of the dredging of the main channel in Kingston to accommodate post Panama container vessels.

Along with these developments there has been an expansion in storage facilities for the supply of bunkers.

With the coming into force of the United States Caribbean Sea ECA, covering certain waters adjacent to the coasts of Puerto Rico and the United States Virgin Islands, on 1 January 2014 there was already an increase in demand for Low Sulphur diesel by ships which trade with US Caribbean ports.

It is expected, and we are confident, that with the coming into force of the 2020 sulphur cap that the local bunker suppliers will continue to meet the demand for compliant fuel in the post 2020 period.

S&B: Can you outline some of the key steps MAJ has taken so far to prepare for IMO2020?

PB: The MAJ is the regulator of shipping in Jamaica and the focal point for the implementation of MARPOL Annex VI both as a port State and a flag State. We have been engaged and involved in the rule-making process that impacts the development of the 2020 Sulphur cap measures at the IMO.

Administratively, the MAJ has established a Bunker Industry Oversight committee which is comprised of key regulators involved in the promotion and regulation of the bunker industry.  The Committee will continue to monitor the developments related to the 2020 Sulphur cap and make recommendations to the Government in relation to the strategy to be adopted to position Jamaica as a leading bunkering hub in the Caribbean region.

In accordance with the guidelines developed by IMO and adopted and promulgated by the Caribbean MOU on port State Control,  PSC Officers in Jamaica will be preparing to inspect facilities on board to ensure compliant fuel is in use, or the ship is equipped with mechanisms such as scrubbers to regulate the sulphur emission content for compliance with the 0.5% requirement.

PSC Officers have in fact commenced an awareness campaign to increase consciousness among vessel operators who call at Jamaican and indeed Caribbean ports, by issuing vessels boarded, with a "Letter of Information", similar to what has been implemented in the Paris MOU region.

Apart from advising of the imminent entry into force the letter also highlights where emphasis will be placed during PSC inspections come January 1, 2020.  For example, records of bunker delivery notes and associated samples or records; existence of written procedures on board covering fuel oil change-over operations, where appropriate; familiarity of Master and ship's personnel with essential fuel oil management procedures; and that the ship has an appropriate approval for any installed exhaust gas cleaning systems, or equivalent, where required.

The Authority continues to meet with the major stakeholders in the private sector to determine their readiness for the coming into operation of the 2020 Sulphur cap. Legislatively the MAJ has sent instructions for the development of legislation to implement the amendments to MARPOL Annex VI and this draft legislation is in an advanced stage.

S&B: What steps has Jamaica taken in terms of a wider leadership role as the region as a whole, prepares for IMO2020.

PB: Jamaica continues to play a leadership role  in the implementation of MARPOL Annex VI in the region using its  position as  Lead Partner Country under the IMO's GLOMEEP project  where it has carried out legal, policy and institutional  reforms for the implementation of MARPOL Annex VI and has indicated that it is in a position to share its best practice with its regional neighbours.

The upcoming, regional conference hosted in partnership with IBIA, is positioned at a key point on the global IMO 2020 timeline

The upcoming, regional conference hosted in partnership with IBIA, is positioned at a key point on the global IMO 2020 timeline when many vessels will have just started their transition to 0.50% bunker fuels. This IBIA Caribbean Bunker Conference (ICBC) in September this year is therefore one of the first events where delegates can benefit from this real world experience of IMO2020's impact.

Key discussion points will be an exploration of what the impact of the IMO 2020 sulphur regulation will be for bunker buyers, suppliers, and operators in the region, particularly compliance solutions, enforcement, and the availability of new fuels.

In addition to providing an understanding of the implications of the IMO 2020 changes for shipowners to suppliers, ICBC will showcase the current regional bunkering infrastructure and look at what the future holds for the Caribbean and the Americas bunker markets.

S&B: What other developments have there been that will help support Jamaica's ambition as a bunkering hub in the post-2020 market?

PB: The growth of bunkering is pursued as a major element of the positioning of Jamaica as a shipping Hub. Legislation in the form of the SEZ Act has been passed which provides for bunkering companies to enjoy fiscal and other incentives to facilitate the growth of the sector.

The new sulfur rule as well as the need to meet future emissions goals means the industry is also starting to look to alternative bunker fuels such as LNG. Although Jamaica has not yet established LNG bunkering facilities, the coming on stream of its LNG facilities in the country will clearly help position Jamaica as a major supplier of LNG bunkers in the region.

ICBC takes place from September 10-12, 2019 at the Iberostar Grande / Suites Hotel, Montego Bay, Jamaica, and is hosted by the Maritime Authority of Jamaica and presented in partnership with Ship & Bunker.

For more information, including details on the full agenda and to register, please visit: https://shipandbunker.com/events/icbc