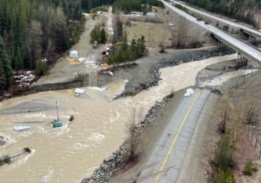 A pipeline outage in Canada that reduced bunker supplies at Vancouver is likely to last for several more days.

Canada's Trans Mountain pipeline was shut the week before last following a major storm in the region. It was earlier hoped that a restart could be managed by the end of last week, but this has now been delayed by weather conditions at the site.

"Heavy rains impacted air and ground access and caused substantial accumulation of water in some areas where work is underway," Trans Mountain Corp said in an update on its website this week.

"Work was interrupted at some sites on Sunday November 28, 2021 due to high water or lack of access.

"Based on current conditions and the amount of progress we have been able to make in the face of continued challenges with weather and access, we are still days away from restarting the pipeline at a reduced capacity."

Some local bunker market sources in Vancouver told Ship & Bunker last week that there would be no avails there until the pipeline reopened. But Minerva Bunkering has said that its supply remained uninterrupted.

Ships under 5,000 gt not including in proposed emissions trading scheme, environmental campaigner says this should be 1,000 gt.

However, conflicting outlooks are spreading almost as fast as the variant.