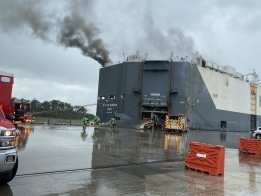 The fire broke out at about 4 PM local time on Thursday. Image Credit: Jacksonville Fire and Rescue Department / Twitter

Firefighters at the port of Jacksonville in Florida are battling a large fire on board a car carrier.

Fire first broke out at 4 PM local time on Thursday on board the Höegh Xiamen, Höegh Autoliners said in a statement on its website Friday.

"There are no injuries to any of the 21 crew members, who have all been evacuated from the vessel," the company said.

"There are no reports of any pollution."

Eight firefighters have been hospitalised after an explosion on board the ship while they were fighting the fire, according to the Jacksonville Fire and Rescue Department. The department currently expects it to take "days, not hours" to extinguish the blaze, according to a post on its Twitter account Friday.

No further information about the cause of the fire is yet available.

First arrest in port for some months.