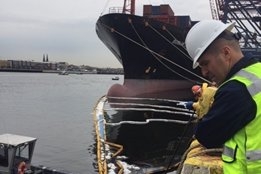 A hole in the hull of Hapag-Lloyd container ship Dublin Express has caused a bunker spill in New York.

A statement from the shipowner today said the 4,120 TEU capacity vessel was conducting unloading operations yesterday evening in the Global Marine New York Container Terminal when it was discovered that fuel was escaping through a 40 x 40-centimetre opening.

"The hole was sealed during the night. In addition, extensive containment booms were promptly set out to prevent any additional spreading of the oil and to proactively protect nearby nature reserves," Hapag-Lloyd said, adding that the 2002-built box ship vessel had encountered heavy swell while sailing from Port Everglades to New York.

While the amount of fuel spilled into the waterway is currently unknown, an incident report by National Oceanic and Atmospheric Administration (NOAA) said the total amount at risk of spill is 224,000 gallons.