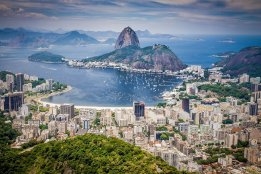 The Rio office will be the company's fourth in the Americas after Panama City, Stamford and Houston. File Image / PIxabay

The Rio office will be the company's fourth in the Americas after Panama City, Stamford and Houston, Monjasa said in an emailed statement on Wednesday.

The firm has launched MGO supplies at Brazilian ports by barge as of September 14, and has chartered the 1,500 m3 barge TWB-250 for the new operation. The company was previously only delivering by truck in Brazil.

The company's bunker trader Aline Vaz will be leading the new Brazilian operation.

"The maritime logistics in Rio de Janeiro can be challenging," Rasmus Jacobsen, managing director in the Americas for Monjasa, said in the statement.

"This is a true niche market where understanding the local regulations and product flows in detail are prerequisites for running the daily operations.

"Monjasa's decision to establish ourselves in Rio de Janeiro comes from a sincere conviction that we can make a difference for offshore operators and shipowners.

"Monjasa has a history of entering more complex markets in West Africa, the Middle East and Latin America and we have been working for several years to meet the demand for more streamlined and transparent marine fuel operations in Rio de Janeiro too."

Ship & Bunker readers can access a 10% discount on registration by clicking here and entering the code SB10 when prompted.

While ship-to-ship transfers are being used to be build bigger cargoes for distant markets.

The port authority has decided against proceeding with previously mulled plans to implement a licensing system for conventional bunker fuel supply.

The firm presented the design at the Gastech industry event in Milan.