Bunker Spill Reported After Fishing Vessel Sinks Off Northwest US 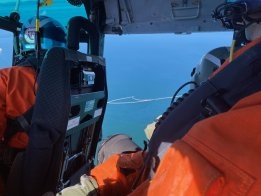 A dive team was sent on Sunday to determine the best way to remove the boat and its fuel. Image Credit: US Coast Guard

A bunker spill has been reported after a fishing vessel sank off the northwest coast of the US last week.

The fishing vessel Aleutian Isle sank off San Juan Island on Saturday with as much as 2,600 gallons of bunker fuel on board, the Seattle Times reported on Sunday. The vessel's five crew members were rescued.

A sheen covering 1.75 miles of water in the area was observed by the US Coast Guard by Saturday evening.

A dive team was sent on Sunday to determine the best way to remove the boat and its fuel, the Coast Guard said on Sunday.

"The depth of the wreck poses some additional safety concerns that the team is working to mitigate," the Coast Guard said.

"We have to think anew and find completely new solutions compared to what we know today as ordinary ships," vessel designer says.

The symposium on new nuclear in maritime will be held in London on 19th September 2022.