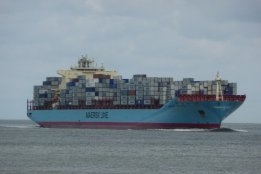 Maersk is aiming for net zero GHG emissions by 2040, and had committed to only ordering ships capable of running on carbon-neutral fuels from now on. File Image / Pixabay

Container line AP Moller-Maersk is backing a US congressman's bill seeking to impose a 45% GHG emissions cut by 2030 for shipping companies doing business with the US.

The firm is supporting Congressman Alan Lowenthal's 'Clean Shipping Act', the California politician said in a statement on his website on Tuesday.

The bill, co-sponsored by Congresswoman Nanette Barragan, sets increasing carbon intensity reduction targets over the next decade, with a 45% cut envisaged by 2030. The legislation also seeks to eliminate in-port emissions entirely by 2030.

"Now is the time for action and we urge the United States Congress to pass this legislation to achieve a 45% decrease on carbon dioxide equivalent reductions by 2030," Doug Morgante, vice-president for US government relations at Maersk, said in the statement.

"The most significant challenge is the availability and cost competitiveness of the green fuels necessary to reach our targets.

"It is fundamental that leading governments, such as the US, and industry work together to accomplish long-term solutions."

Maersk is aiming for net zero GHG emissions by 2040, and had committed to only ordering ships capable of running on carbon-neutral fuels from now on. The firm is the world's second-largest container line.

This an open event with no fee.