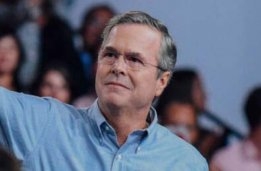 Jeb Bush is a former governor of Florida and an advisory board member of United Against Nuclear Iran. Image Credit: Jeb2016.com

Former Florida Governor Jeb Bush has waded into the upcoming election to replace IMO Secretary General Kitack Lim, suggesting Panama's candidate should not be allowed to win the role because the country allegedly enables sanctions evasion.

Lim's second term at the head of the UN body will finish at the end of 2023, and an election to find his replacement will be held in July. Arsenio Dominguez of Panama -- who presided over the IMO's Marine Environment Protection Committee during the difficult negotiations over the 0.50% global sulfur cap in 2016 -- is standing as a candidate.

Jeb Bush, former governor of Florida and an advisory board member of United Against Nuclear Iran, wrote an opinion piece in the Washington Post last week objecting to that prospect. He alleged Panama is not doing enough to prevent tankers under its flag from carrying sanctioned Iranian oil cargoes, despite receiving significant investment from the US.

"Incredibly, Panama wants to lead the International Maritime Organization, a UN agency with responsibility for the safety and security of shipping and combating illicit maritime activities," Bush wrote in the article.

"The Panamanian government is undeserving of the prestige that it would gain if its ambassador to the organization, Arsenio Dominguez, were to become secretary general of the agency.

"Simply put: Panama is unworthy of the international community's trust.

"There is still time for the United States to forcefully make that case.

"The International Maritime Organization's leadership election isn't until the summer; in the coming months, the United States should press Panama to choose between aiding a misogynistic and murderous regime or clearly aligning itself with the free world."

Ships can access range of services including bunkers at the port.

Uniper and Montfort are in the process of finalising the sale.