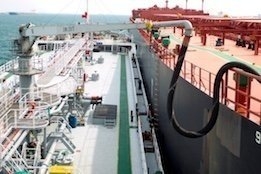 Use of a Maritime and Port Authority of Singapore (MPA) approved Mass Flow Metering (MFM) system is now mandatory for all distillate bunkering effective today, July 1, 2019.

The move follow the highly successful introduction of mandatory MFM use for MFO delivery that became effective January 1, 2107.

"All  MPA  licensed  bunker  suppliers,  bunker  craft  operators,  bunker surveying companies and bunker surveyors are reminded to adhere strictly to the terms and conditions of their bunker licences, and the requirements of the Technical Reference for Bunker Mass Flow Metering (TR 48:2015) for bunker delivery by MFM in the Port of Singapore," MPA said in an industry reminder via a Port Marine Circular.

"MPA will take firm action against any licensee who has acted in contravention of their licences, including suspending or revoking their bunker licences, as appropriate."

While mandatory MFM use has not completely eradicated volumetric malpractice at the port, the fact MPA has shown it will take action against those who break the rules has lead to calls for more bunker markets to follow Singapore's lead.

In favour of a move into renewables market.