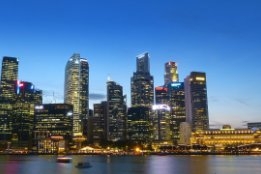 The Lim family has lost interest in restructuring Ocean Tankers and has requested it be placed into liquidation, according to an update by judicial managers EY.

The request came on September 30 and is a result of the judicial managers of Hin Leong having sued the family, according to a report by Reuters.

Ocean Tankers is understood to be spending $540,000 a day to maintain a fleet of some 150 vessels it has on charter, most of which are owned by the Lim family.

EY has applied for court permission to return the bulk of fleet in an effort to preserve cash, according to the report.

If granted, the move would also allow it to resume a number of cash-generating units including its oil lubricants business.

As Ship & Bunker reported yesterday, Ocean Tankers is within weeks of running out of cash.

The emissions savings delivered by these vessels would make them eligible for preferable asset financing versus conventionally fuelled ships for as much as eight years.

Sessions scheduled for November 4 and 5 have been moved to November 11 and 12.