China Launches Study Into Methanol as a Marine Fuel 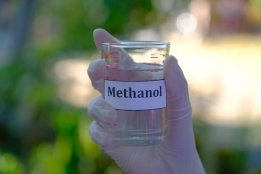 Methanol may be one of the bunker fuels of the future. Image Credit: Methanol Institute

A study into the use of methanol as a marine fuel has launched in China.

Industry group the Methanol Institute has joined the research project, which is being led by Chinese transport ministry think-tank the China Waterborne Transportation Research Institute, the industry body said in an emailed statement Tuesday.

"Based on the characteristics of China's energy and shipping industries, the study will create comprehensive guidance and policy suggestions for the use of methanol as a marine fuel, reflecting the experience already gained in large and small methanol-fuelled marine engines, and will develop a roadmap for the adoption of methanol as a marine fuel in China," the Methanol Institute said in the statement.

Methanol is already in use by some vessels as a bunker fuel. If produced from biomass or using renewable electricity, it has the potential to be one of the alternative fuels that the shipping industry shifts to as it takes on the International Maritime Organization's greenhouse gas emissions reduction strategy.

More Weekly Gains For Crude Despite Persistent Fears Over Covid