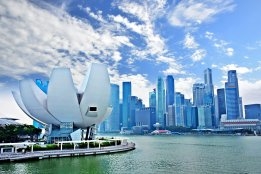 The Singapore port authority has asked liquefied natural gas (LNG) bunker suppliers that wish to operate in the to submit proposals to the Maritime and Port Authority.

If licences are granted, the port could see two additional LNG bunker suppliers operating in the port by early next year.

LNG bunker supply has been slower to emerge in the Asia-Pacific region than in Europe, but rapid growth is expected in the coming years.

"MPA will issue up to two additional LNG bunker supplier licences to support growing demand for LNG bunker in the Port of Singapore," the authority said.

Submissions must be received by 15 December.

TotalEnergies to Work With Columbia Shipmanagement on Decarbonisation

The company has signed a deal with Inatech to use its Bunkertech software.

The firm is looking for candidates with a degree in business or economics.