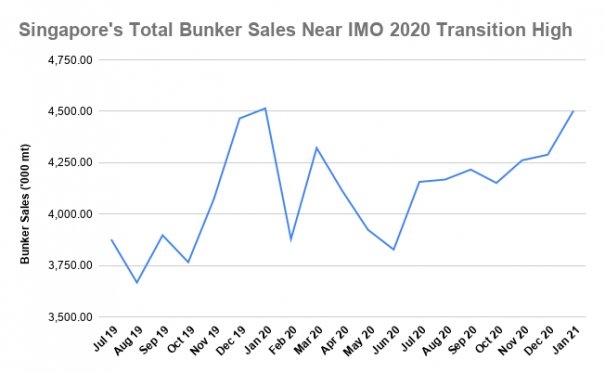 Bunker sales in Singapore, the world's largest marine fuels hub, started 2021 with only a marginal decline from the artificially high level seen a year earlier at the start of the IMO 2020 transition.

The city-state's total sales reached 4.51 million mt in January, according to preliminary data from the Maritime and Port Authority (MPA), slipping by just 0.3% from the level seen in January 2020.

The decline will reflect the artificially high level of demand at the start of 2020, when shipping companies were stockpiling the new VLSFO blends just after switching to them on concern over potential availability problems.

The mandatory mass flow meters used to measure all bunker deliveries in Singapore come with a +/-0.5% margin of error, while remaining more accurate than traditional measurement systems used at most other ports.

The number of ships calling at Singapore for bunkers in January was little changed on the year at 3,593 vessels. That left the average stem size slightly down in January, falling by 0.3% to 1,253 mt. 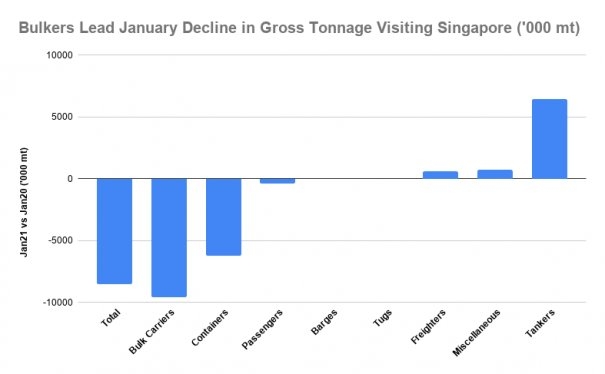 That decline will partly have been driven by a slip in bulkers and container ships visiting Singapore.

These were the two biggest shipping segments driving a year-on-year decline in gross tonnage visiting the city-state in January, losing 9.56 million mt and 6.26 million mt, respectively.

January 2021 was the first month for which Singapore's data broken down by product can be compared on a like-for-like basis with the same month a year earlier, coming a year after the first month of the VLSFO era. 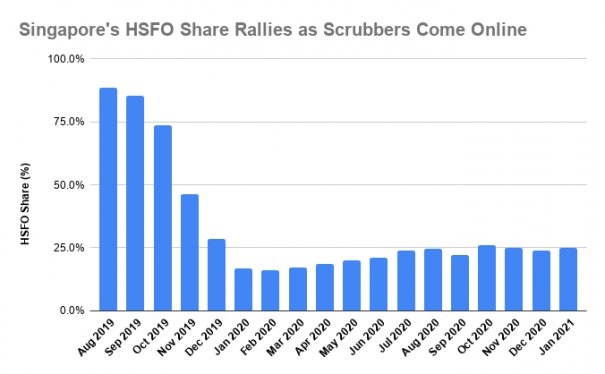 The biggest change visible over that time is the rally in HSFO sales, which gained 47.9% on the year to 1.13 million mt. HSFO's share of total bunker sales was 25.1% in January, compared with 16.9% a year earlier.

The closures may bring tightness to the US Gulf bunker market in the coming days.

A winter storm warning for the region remains in effect until 6am Eastern Time on Tuesday.

"Having the best team is a continuous objective of any successful organisation, and accordingly we are actively engaged in dialogues with several potential new hires."