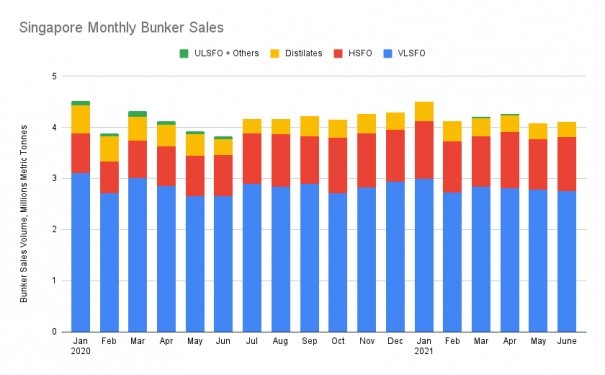 Bunker demand in Singapore, the world's largest marine fuels hub, advanced on both a monthly and yearly basis in June, showing a steady recovery from the worst of the COVID-19 crisis.

The city-state's total demand reached 4.1 million mt in June, according to preliminary data from the Maritime and Port Authority, up by 1% from the previous month and by 7.4% from June 2020.

The yearly gain is from the nadir of the COVID-19 pandemic's impact on shipping activity and marine fuels demand in 2020; June 2020's total was the lowest level in eight months, and preceded a fairly steady recovery for the rest of last year.

Demand a year ago may also have been suppressed by shipping companies working through the VLSFO stockpiles they had built up during the IMO 2020 transition, rather than taking on new purchases. But the rise in sales on a monthly basis from May to June 2021 shows demand levels are continuing to improve this year as global economic activity starts to pick up. 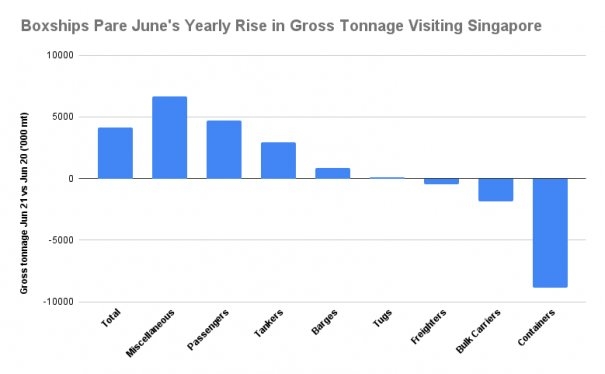 The total gross tonnage visiting Singapore advanced by 1.8% on the year to 231 million mt. This was heavily pared by a decline in container traffic, which lost 8.9 million mt despite current record demand levels for that segment globally.

Miscellaneous ships saw the strongest growth, gaining 6.7 million mt, and passenger vessels also saw a strong 4.7 million mt rise, while the bulkers were the second-biggest loser after boxships with a 1.9 million mt fall.

Four other vessels detained in previous months remained under arrest in UK waters.