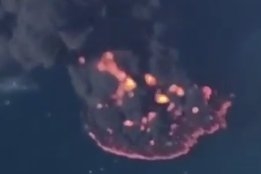 Pollution caused by bunker fuel aboard the sunken Iranian oil tanker Sanchi is compounding what Japanese authorities have called the worst oil ship disaster in decades.

The vessel, which had been drifting ablaze following a January 6 collision with another vessel, sank Sunday and is understood to now be inside Japanese waters.

A report by Reuters notes it is the biggest tanker spill since 1991, that is also believed to have claimed the lives of all 32 crew onboard the vessel.

Concern is now growing, particularly from environmental groups, about potential damage to the local ecosystem from the marine fuel that was onboard the vessel.

It is believed there could have been as much as 2,000 metric tonnes (mt) of HFO onboard the vessel at the time it sank.

"At this time of year the area is used as wintering ground by common edible species such as hairtail, yellow croaker, chub mackerel and blue crab. The area is also on the migratory pathway of many marine mammals, such as humpback whale, right whale and gray whale," Greenpeace said in a statement.

In a note to Ship & Bunker, Sue Libenson, Senior Arctic Program Officer, Pacific Environment, said the tragedy has once again highlighted the danger of HFO spills, particularly in the sensitive regions such as the Arctic.

"The stricken tanker now sunk offshore of Shanghai should give pause to all with concern for the ocean, especially those who depend on sensitive, remote waters such as the Arctic.  The tanker's cargo of light fuel burned dramatically for a week, but response crews have voiced concerns about the looming fate of the heavy fuel oil or bunker fuel that powered the tanker.  Heavy fuel is the dirtiest kind of oil and highly persistent if spilled.  A large heavy fuel spill into the waters of China's largest fishery would compound the tragedy of the tanker's missing crew.  High seas, poisonous fumes, explosions, and winds have hampered rescue and response efforts this week," she said.

"China's calamity highlights efforts underway to prevent heavy fuel oil spills in other sensitive, but far more challenging waters.  International consideration is currently being given to phase out the use of heavy fuel oil in the Arctic where communities depend on marine life and spill response is negligible.  If spilled, heavy fuel oil would remain for long periods and could spread widely if entrained in moving ice.   This dangerous fuel is already banned under international rules for Antarctic waters.  The Arctic deserves the same international precautions."

Singapore's year-to-date total was 45.8 million mt, up by 0.6% from the same period a year earlier.

Meanwhile, one analyst predicts oil prices at $200 over the next five years.