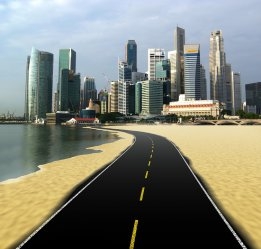 Ships are waiting longer to refuel in Singapore as bunker barges get ready for IMO2020.

According to local news provider the Business Times, the squeeze is down to barges being out of the market to have their tanks cleaned in preparation for the global 0.5% sulfur cap on bunker fuel.

Citing market sources, the report says that it can take up to two weeks to book a barge rather than the usual five days.

The longer waiting times are adding to congestion in the Straits of Malacca off Singapore where tankers are already anchored as floating storage for low sulfur fuel oil.

The Maritime and Port Authority of Singapore issued a port circular on Sunday reminding ship operators to pay attention to the rules for ships navigating through the Malacca Straits.

Pressure on barging costs from the introduction of the 0.5% sulfur limit on bunker fuel has been expected as the number of monthly turnarounds a bunker barge would be able to make is likely to fall. IMO2020 rule comes into force on January 1.

The new "freshwater charge" may add up to 15% to the cost of traversing the Panama Canal.

Panama is likely to have seen the strongest demand growth of the major bunkering hubs in 2019.