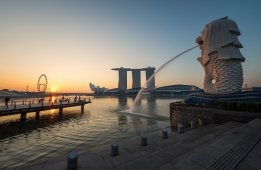 Bunker supplier A DOT Marine has dropped off Singapore's list of its accredited suppliers, taking the total number of firms operating at the world's largest bunkering hub to 42.

The city-state's Maritime and Port Authority (MPA) removed A DOT Marine in an update to its list published earlier this month.

A DOT Marine was first registered as a Singapore bunker supplier in February 2014, supplying MGO only. The company was Singapore's second-smallest supplier by volume last year.

Ship & Bunker looks at what bunker buying alliances bring to the table, and where they fit in the growing number of marine fuel players.

CMA CGM's dual-fuelled 15,000 TEU boxships on the Pearl River Express route from China to Los Angeles will bunker in the Yangshan area.