Zhoushan Set for LNG Bunkering in 2020 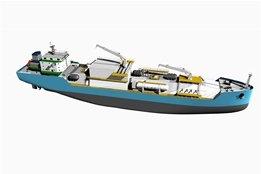 Zhoushan i sion target to have LNG bunkering in 2020 courtesy of what will be the first Chinese owned LNG bunker vessel.

The ship is being built by the Dalian Shipbuilding Industry Corporation (DSIC) for an affiliate of the ENN Energy holdings.

Once launched, the 8500 m3 capacity vessel will be based at the newly opened ENN Zhoushan LNG receiving & bunkering terminal in China’s eastern Zhejiang province.

“Being the first vessel of its kind built and owned by Chinese companies, makes this an important and exciting project,” says Scott Oh, Area Sales Director, Middle East & Asia, Wärtsilä Marine, whose firm is supplying various systems for the vessel including its cargo handling system and a Wärtsilä 34DF dual-fuel main engine.

“This project is China's first LNG bunkering vessel with a C type tank and is another milestone for DSIC in the gas carrier market. It follows the successful delivery of a VLEC with a capacity of 85,000cbm - the world's largest C type tank.”