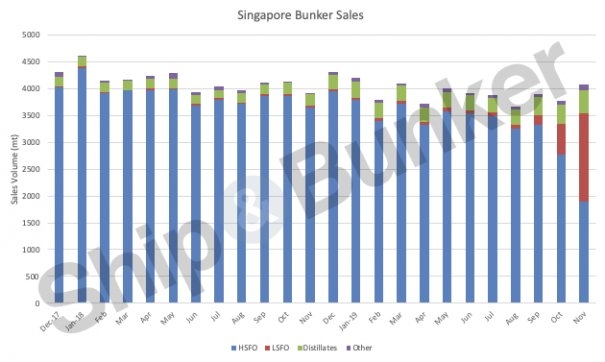 HSFO remained Singapore's most popular grade of marine fuel in November despite volumes crashing 32% month-over-month to 1.9 million mt, representing just 46.4% of the month's total bunker sales, according to the latest preliminary data from the Maritime and Port Authority of Singapore (MPA).

MPA records dating back 20 years show that until this year HSFO has historically made up 90% or more of the sales total. In 2019 it has still been above 85% of the total until last month where it fell to 73.7% of overall sales.

Sales for all products in November totalled 4,075,600 mt - the port's best sales performance since January

The historic decline comes ahead of the upcoming global 0.50% sulfur cap on marine fuel that takes effect from January 1, 2020.

Sales for all products in November totalled 4,075,600 mt - the port's best sales performance since January.

As expected, it was sales of the new IMO2020 grade fuels that replaced the declining HSFO volumes, with LSFO sales making up 40.4% of the total with 1.65 million mt sold.

This is a significant increase on the 569,900 mt of LSFO sold last month.

Distillate sales also saw a notable increase for the month, jumping 24.7% over last month to a record high 430,000 mt and a record 10.6% of the overall sales.

With 3,537 calls for bunkers, November was also the busiest month for refuelling since January and put the average stem size at a very typical 1,152.3 mt.

The performance means bunker sales for the first 11 months total 43 million mt, some 2.5 million less than at the same point last year.

Maritec has tested several VLSFOs delivered in the ARA region to be observed with the presence of chemical contaminants in recent months.