Bunker prices at Zhoushan have dropped to a discount to Singapore's levels over the last month, signalling the Chinese port may be able to attract increased market share this year as it secures new supplies.

Very low sulfur fuel oil (VLSFO) prices at Zhoushan dropped to a record discount to Singapore's levels of $31.50/mt on Monday, according to Ship & Bunker pricing.

On average Zhoushan's VLSFO prices have been at a discount of $4.94/mt to Singapore so far this month, down from an average premium of $4.89/mt in March and $24.43/mt in February.

Historically bunker prices at Zhoushan have been at a significant premium to Singapore, with an average high sulfur fuel oil premium of $44.78/mt over the past year.

Singapore's bunker sales have seen a strong start to 2020 despite the COVID-19 pandemic, and its surprise rise in sales in March both on the month and the year is likely to have been driven by taking market share from other Asian ports despite an overall drop in global marine fuel demand.

But Zhoushan also managed to achieve a rise in sales last month -- seeing a 70,000 mt gain from February to 348,500 mt in March, according to price reporting agency Argus Media.

What's driving Zhoushan's drop in prices ... is an increase in VLSFO production by Chinese refineries.

What's driving Zhoushan's drop in prices -- and may allow it to take some market share from Singapore over the coming months -- is an increase in VLSFO production by Chinese refineries.

The tax changes may prompt the country's refiners to produce as much as 18 million mt/year of VLSFO, providing a boost to its own bunker ports where the product can be sold without further freight costs.

With Singapore's bunker sales at around 47 million mt last year, tens of millions of tonnes ahead of its competitors, its status as the world's leading bunkering hub is unlikely to face any serious competition any time soon.

Price is also not the only factor in choosing a bunkering port, particularly at a time when crude and bunker prices have collapsed and the savings from switching bunkering location become diminished. Add in Singapore's longstanding reputation in the bunker industry, geographical position, numerous standards and mandatory MFMs, along with the role of the Maritime and Port Authority (MPA) there in supporting the market, competing ports such as Zhoushan may find they have to do a lot more than have lower prices to steal market share away from Singapore.

But with the new availability of large quantities of cheap bunkers at ports in the East China Sea, it is not doubt something bunker suppliers in Singapore will be monitoring. 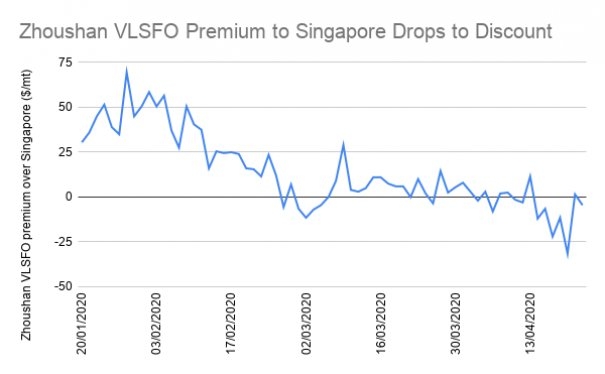 Zhoushan's bunker prices have moved to a discount to Singapore's over the past month. Image Credit: Ship & Bunker

Gasoil reserves worth around $66 million.

Crude Down But Demand Continues To Grow As Lockdowns Ease