VLSFO Priced at a Premium to MGO in Singapore 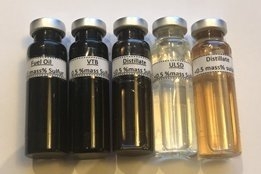 VLSFO bunker prices in Singapore ended the week at a premium to MGO.

Argus says its data indicates LSFO in Singapore has been priced above LSMGO since December 6.

At all other ports tracked by Ship & Bunker the 0.50%S VLSFO is priced at a discount to gasoil, as per conventional thinking on the matter has suggested it would be.

"Buyers are now more actively comparing prices for LSFO and LSMGO in the market," Argus quoted a gasoil supplier as saying, adding that they did not anticipate there would be a reversal in price relationship.

However, the development will not be a complete surprise to some, with Ship & Bunker reporting in July that a source had predicted some operators may be happy to pay a premium for VLSFO in order to get a higher performing product.

As has also been previously noted, the engines of some vessels are not well suited to extended use on lower viscosity fuels, and while MGO has a higher calorific value than fuel oil, volumetrically fuel oil has a higher energy density.

Forward has been a strong advocate of LNG bunkering as a way for the shipping industry to reduce its carbon footprint.