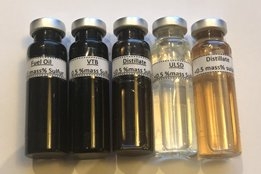 Bunker buyers in the Russian Far East are showing a preference for DMB grade material to comply with the upcoming 0.50% global sufur cap, despite the availability of a less expensive VLSFO product.

Supplier and trader Imtrade began selling its RMD-80 spec IMO2020 grade blend at the end of May, and says many buyers are overlooking certain performance advantages of VLSFO particularly in regards to viscosity and density.

"At the same rate of consumption, switching from HFO to DMB will cause a vessel to lose speed due to it being a much lighter product," a spokesperson for Imtrade told Ship & Bunker.

"One customer who operates a reefer indicates for his vessel this can be as much as 3-4 knots. Of course pressures can be increased but this leads to higher consumption also. In real world use a run consuming 10 mt of IFO180 would require 13.5 to 14 mt of DMB."

Imtrade says it is now looking to lift the viscosity of its VLSFO to make it even more attractive, but there are cost penalties to doing this

The DMB is around 10 cSt, while its VLSFO blend is in the 30-40cSt range - not as significant as the difference between DMB and IFO180, the spokesperson notes, but it is still meaningful.

Imtrade says it is now looking to lift the viscosity of its VLSFO to make it even more attractive, but there are cost penalties to doing this.

Specifically, increasing the amount of heavy oil in the blend also lifts the sulfur content, meaning a higher proportion of ultra-low sulfur material is also needed to keep the overall blend under IMO2020's 0.50% sulfur cap.

The result is that every 10 cSt increase adds an extra $8/mt to the price.

While the most favorable balance between viscosity and price is not yet clear, with VLSFO's current discount to DMB at around $80-$100/mt it would seem there is plenty of room wiggle to experiment and find the "sweet spot".

That said, Imtrade notes some operators of large containerships have already said they need to have 100cSt+ material, which could narrow that discount to $16/mt or less.

On a more positive note, this is not the first time the issue has been raised with Ship & Bunker and one source has even suggested some operators may be happy to pay a premium for VLSFO in order to get a higher performing product.

For now, with a little more than five months to go before the new rules come into force Imtrade says demand for VLSFO remains weak, but it is getting a lot of requests for delivery in 4Q and onward.

"Unfortunately, for today it is hard to say how pricing will be globally and at our domestic source side, therefore have to postpone such inquires for now," the spokesperson said.