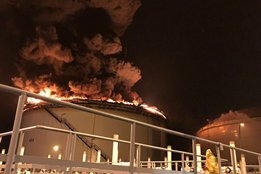 Some 128 personal and 31 firefighting and support vehicles involved in the firefighting operation. Image Credit: SCDF

Emergency crews in Singapore have undertaken a huge operation to extinguish a fire at Tankstore's Pulau Busing terminal.

The fire was in a storage tank containing fuel oil, according to reports.

Singapore Civil Defence Force (SCDF) tweeted that some 128 personal and 31 firefighting and support vehicles were involved in the operation.

"SCDF was alerted to the fire at Pulau Busing at about 5.50pm. After approximately 6 hours of intense firefighting operations, the raging oil storage tank fire was extinguished by the combined efforts of SCDF Emergency Responders and CERT members," SCDF said in another tweet Wednesday.

The fire is not expected to impact fuel supply or trading in the port city, Reuters reported.

The Safmarine brand will be integrated into Maersk, and the Damco brand's air and less-than-container load offerings will be combined within Maersk's products.