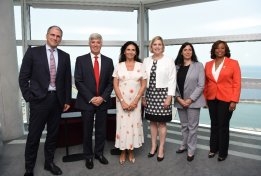 The two companies have also signed a memorandum of understanding on other alternative bunker fuels. Image Credit: Shell

French container line CMA CGM has signed a deal with global energy producer Shell to take on LNG bunkers in Singapore and explore the use of other fuels including methanol.

The company has signed a multi-year LNG bunker supply deal for its 13,000 TEU boxships calling at Singapore from the second half of 2023, Shell said in an emailed statement on Tuesday.

The bunkering operations will be performed by FueLNG, Shell's Singapore joint venture with Keppel Offshore & Marine Ltd. The FueLNG Bellina and a new 18,000 m3 delivery vessel coming into service next year will carry out the deliveries.

"CMA CGM continues to see the potential in LNG as a marine fuel, so it is a hugely positive step to be extending our supply commitments in this area," Tahir Faruqui, head of downstream LNG at Shell, said in the statement.

"By using LNG as a marine fuel, the industry immediately places itself on a decarbonising pathway, starting today.

"LNG is a fuel in transition and offers a credible pathway to liquefied biomethane and the hydrogen-based fuel liquefied e-methane; both having the potential of being net zero."

The two companies have also signed a memorandum of understanding covering the following elements, according to the statement:

Thus far France's TotalEnergies has been CMA CGM's main supplier of LNG as a bunker fuel.

Singapore saw 50,000 mt of LNG bunker sales last year in its first year of having the fuel commercially available. That figure is likely to grow exponentially in the coming years.

Dilution of CI is done by blending two or more fuel blend components with different CI's.