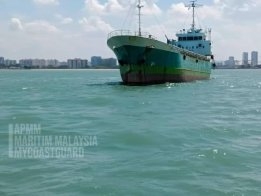 The ship and crew have been taken to Batu Uban for further investigation. Image Credit: MMEA

The Malaysian authorities have arrested a general cargo vessel for alleged illegal anchoring in their waters.

The cargo ship MV Kong, registered to the Sierra Leone flag, was arrested near Bagan Ajam at about 1:30 PM local time on Friday, the Malaysia Maritime Enforcement Agency said on Saturday.

The vessel "is believed to have mistakenly anchored without permission," the organisation said.

The ship had nine seafarers on board, three of which are Indonesians and the remaining six Iranians.

The ship and crew have been taken to Batu Uban for further investigation.

Malaysia has significantly stepped up its maritime enforcement processes this year, particularly focusing on stopping ships from anchoring in its waters without permission.

Production from the new plant is due from 2024.

The bank warns that record demand and tight supply could cause oil prices to skyrocket.

Oil Dips Slightly On Lazy Pre-Christmas Trading, But A Pickup Is Anticipated

Meanwhile, one analyst said a quick omicron recovery could exacerbate a tight market.