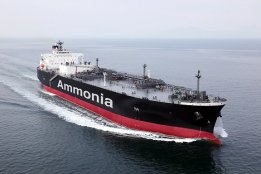 The ship would carry ammonia both as cargo and as bunker fuel. Image Credit: NYK Line

A group of Japanese companies has agreed jointly to work on the research and development for an ammonia-powered gas carrier.

NYK Line, Japan Marine United Corporation and ClassNK will work on the project together, the companies said Wednesday. They will develop a ship that holds ammonia both as its cargo and bunker fuel, as well as a barge for ammonia deliveries away from land-based facilities.

"In this project, we will be engaged in the R&D of a liquefied ammonia gas carrier.

"It is expected that the use of ammonia, which is the cargo, as a marine fuel will contribute to the early realisation of zero emissions for oceangoing vessels."

Ammonia is one of the alternative bunker fuels being proposed as a way of the shipping industry meeting the International Maritime Organization's target of halving its greenhouse gas emissions by 2050.

A report published earlier this month suggested green ammonia as a marine fuel could cost $13.50-15 per gigajoule for ammonia produced using solar and wind energy in 2040-2050, compared with a very low sulfur fuel oil cost of $12.50-15/GJ so far this year.

Biomethane from the Salamander project's proposed plant in Le Havre could be used as bio-LNG to fuel the container line's gas-powered ships.