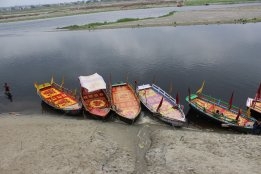 A inland river cargo terminal to be built at Ghazipur  in northern India will have a liquefied natural gas (LNG) bunkering facility.

India's Inland Waterways Authority is behind the project which aims to augment the navigational capacity on the River Ganga in the state of Uttar Pradesh, according to a ministry of shipping statement.

An LNG bunkering facility is also being planned as part of the new development, the statement said.

LNG bunker fuel for inland shipping as made inroads into China's waterways system. The fuel is seen as carrying greater environmental advantages for limiing emissions than oil-derived fuel oil.

The first phase of construction is expected to be completed by mid-2020.