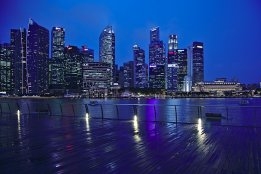 Singapore has been a pioneer in bunker supplier licensing schemes. File Image / Pixabay

The International Bunker Industry Association (IBIA) is seeking feedback from the industry on bunker licensing schemes, as an increasing number of ports consider bringing in a system like Singapore's to improve standards.

IBIA is holding an online meeting of its members on September 29 to discuss the issue. Members' views raised in the discussion will be kept anonymous.

"The board of IBIA has identified the implementation of bunker licensing schemes in major bunkering hubs as one of the key areas for the Association to work toward," IBIA said in a note to members announcing the meeting.

"Singapore has set a great example, and by introducing similar licensing schemes elsewhere it would help provide a consistent standard of service around the world."

The position of Singapore's Maritime and Port Authority (MPA) as both a national authority and a local port authority gives it significant power over its local bunker industry, and it sets firm standards for bunker suppliers to adhere to with its licensing system.

Singapore introduced compulsory mass flow meters for bunker deliveries three years ago, and notably reduced the incidence of quantity disputes in bunker transactions there in doing so.

"Unfortunately, I think the problem [of quantity disputes] will exist as long as we don't make use of the technologies that are available to us," Jan Christensen, senior director for purchase and supply at shipping company Hapag-Lloyd, said during a panel at the conference.

And during a webinar hosted by Ship & Bunker earlier this year, IBIA Chairman Henrik Zederkof expressed support for emulating Singapore's example on a wider scale.

"In IBIA we do have an ambition to see if we can gather the ten, eleven, twelve largest bunker hubs in the world on a bunker licensing scheme, as this will facilitate more than half of the bunker supply worldwide," he said.

The ports of Amsterdam, Rotterdam and Antwerp plan jointly to introduce such a scheme by the start of 2022, according to Zederkof.

Henrik Zederkof and IBIA Director Unni Einemo will be speaking at the IBIA Annual Convention 2020 in November.

To become an IBIA member, contact Tara Morjaria on tara.morjaria@ibia.net.

This was the longest continuous use of 100% biofuel in the shipping industry so far.

For dealings with Islamic Republic of Iran Shipping Lines (IRISL).