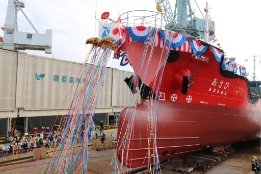 Asahi Tanker Co., Ltd. has named and launched what is said to be the world's first pure battery electric propulsion tanker.

Named Asahi in a December 22 ceremony, the 1,280m3 capacity tanker is scheduled to enter service as a bunkering vessel in Tokyo Bay after completion and delivery in late March 2022.

She features a 3,480kwh battery system and as a pure battery electric vessel will produce zero emissions from operation.

As Ship & Bunker previously reported, Asahi and a sister ship were ordered from a Japanese yard last year.

The second vessel is set for delivery from Imura Shipbuilding Co., Ltd in March 2023.

While realizing pure battery power for large ocean going vessels is seen as many years away, swapping traditional bunkers for batteries has become an increasingly popular choice for smaller vessels plying a fixed route or service area where energy needs are lower and access to charging facilities can be guaranteed.

Passenger ferries fit this operational profile well, with global ferry industry association Interferry recently saying the sector as a whole was embarking on a drive towards electrification.

The company is looking for candidates with eight to ten years of relevant experience and technical expertise within the area of advanced biofuels and synthetic fuels.

Oil Sinks Under The Weight Of China Lockdown Fears

However, the European Union may cause sentiment to return to supply fears.