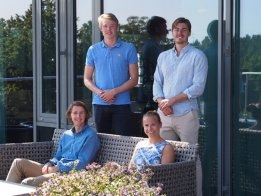 Ammonia as bunker fuel is one solution proposed by the young scientists, one drawback being the lack of flexibility on the position the ship's fuel tank.  The other was using methanol and energy conversion via fuel cells. The idea is more flexible on the fuel tank's positioning.

A common factor for both fuels is that they can be produced solely by green energy, the scientists found.

The conclusion the four young people came to was that "zero emission technologies are just around the corner, and reducing greenhouse emissions to zero would most likely not be too costly to do – at least not for the end user".

But they acknowledged that to make real progress on limiting transport's GHG  "politicians, regulators and policymakers must swiftly come together to agree on how they can best support this change through appropriate initiatives, regulations and incentives".