Iceland to get First Electric Ferry 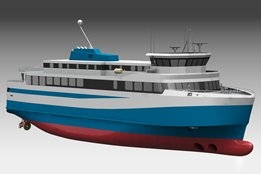 Iceland is set to join a growing list of countries to operate a battery-electric powered ferry.

ABB this week said it will supply power and electric storage solutions for the 70m-long ferry slated to operate on the 13km route between Landeyjahöfn on the mainland and the Westman Island.

The vessel will feature a 3000kWh battery pack and is designed for fully electric operation during its entire 45 minute journey, with onshore charging units on both ends of the route able to replenish the battery in around 30 minutes.

The 550 passenger, 75 car ferry will also feature a diesel-electric generator set for additional power when needed.

With tightening emissions regulations and growing focus on climate-friendly transport, battery power is gaining in popularity as it offers the promise of zero vessel-based emissions.

The ferry’s full lifecycle emissions profile also looks favourable, with Iceland having been long known for getting the majority of its energy from non-fossil sources such as hydropower and geothermal energy.

Designed by Polarkonsult, the vessel is due for delivery from the Crist S.A. shipyard in 2019 and will replace the 1992-built MF Herjólfur.

For both roles the company is looking for candidates with at least two years of relevant experience.

The company is looking for candidates with a relevant educational background and experience from a similar position.