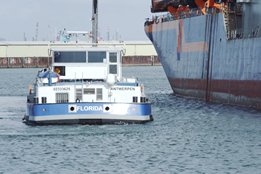 Van Oord has announced it is the latest operator to test biofuel bunkers as part of its emissions reduction efforts.

The trial is being conducted using a product from Shell that is a 50%/50% blend of used cooking oil and regular fuel.

CO2 emissions from burning this fuel are reduced by more than 40% compared with conventional marine fuel, the firm says.

The first pilot will take place during a dredging project in Germany on Van Oord's trailing suction hopper dredger HAM 316.

Van Oord joins several other firms who this year have announced they are testing biofuel bunkers, including Maersk who in March said its deal with Shell was the world's largest biofuel bunker trial.

Martyn McMahon has taken over as global director as of this month.