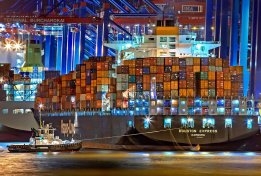 German refiner Klesch is to produce 0.5% sulfur marine fuel at its 100,000 barrels a day plant close to the port of Hamburg in northern Germany.

The IMO2020 grade fuel will be an addition to the refinery's range of products a spokeswoman for the company said as reported by price-reporting agency Argus Media.

The new grade of fuel has performed well in independent tests for compatibility and stabilty, according to Klesch.

The amount of 0.5% suflur bunker to be produced has yet to be decided and will, ultimately, be determined by the new bunker fuel market dynamic which depends on a number of variables. .

Once the 0.5% sulfur cap on bunker fuel is in place from the start of next year, most ship operators are expected to opt for either distillates or low sulfur fuel oil. A smaller number will consider alternative fuel forms such as liquified natural gas while ships equipped with scrubbers units (to control emissions) will continue to use 3.5% fuel oil.

A more exact picture of how the market is moving is expected to appear in the last quarter of this year.