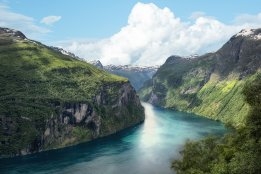 
With the most of the world's cruise fleet in warm lay-up, Norwegian cruise and ferry operator Hurtigruten is to expand its niche cruise offering from next year.

The Norwegian fjords and other cruise destinations will add Hamburg in Germany and Dover in the UK as embarkation ports.

Hurtigruten chief executive Daniel Skjeldam was quoted by marine news provider the Maritime Executive as saying that the demand for closer-to-home departures for cruise trips is increasing.

"We expect this to further increase in the wake of Covid-91," the executive said.

However, the company is not immune from the economic fallout from the collapse in demand for cruise places.  Although the company will operate in Norway this summer, it is expecting fewer foreign tourists and hence reduced income from the season

Hurtigruten has secured a three-year loan amounting to EUR 105 million ($116m).  The loan will boost its liquidity and secure its business through next year based on the current level of activity, the company was reported as saying by Cruise Industry News.