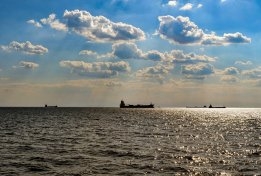 The attack on four ships -- including a bunker tanker -- off the Fujairah coastline in the United Arab Emirates has been linked to Iran by US National Security Advisor John Bolton.

Bolton's comments, widely reported in the media, were made on a visit to Abu Dhabi and come against a background of rising tension in the region.

"There's no doubt in anybody's mind in Washington who's responsible for this," Bolton was quoted as saying by Agence France-Presse.

Iran has denied any involvement in the incident and called for an investigation.