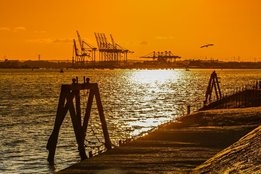 UK Prime Minister Boris Johnson says he is "very interested" in the use of shore power to tackle emissions from ships despite the government's earlier lack of support for the technology.

"We need to reduce the diesel fuel emissions from ships," Johnson said during a visit to Southampton this month, the BBC reports.

"One thing you could do... which I'm very interested in doing... is support the port in providing the juice from the shore, plug them in."

Earlier this year Southampton applied for a grant to support a £7 million ($9.2 million) shore power project at the port, but was this rejected in March amid concerns that included insufficient benefits.

Nevertheless, Associated British Ports (ABP) has pledged to install shore power at the port in 2020 and says it remains "on course" to do so, but there are lingering concerns over funding and infrastructure for the project.

"What we don't want to do is to plug a ship in and brown out the city," BBC quoted Port director Alastair Welch as saying.

The UK Chamber of Shipping in November called for government support to help to decarbonise the shipping industry, including the development of shoreside power.

The new hire will start work on March 1.

The rate increased will be communicated by the end of January and will come into effect on 1 March.