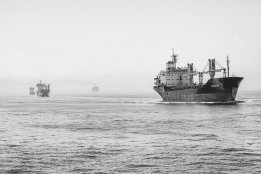 Mines have been removed from the territory of the port of Mariupol and nearby waters, according to Reuters citing the Russian defence ministry.

Russia said it had established full control of the Ukrainian port Mariupol last week after Ukrainian fighters holed up in the besieged Azovstal steelworks surrendered to Russian forces.

However, doubts remain over whether the port is functioning fully.

According to maritime news provider Lloyd's List, the harbour remains blocked from a dredger which was intentionally scuttled in the port to hinder Russian military progress.

In addition, the International Maritime Organisation has warned shipping to be aware of danger from free-floating mines in the Black Sea, the report said.

The company "announces that it no longer pursues a combination between Frontline and Euronav," it said on Monday.